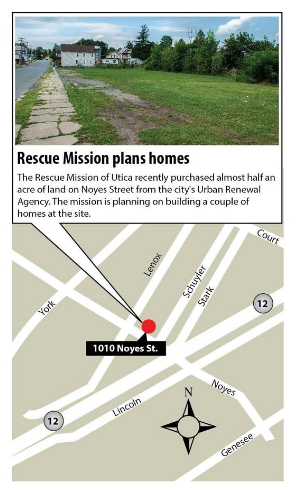 UTICA — Some residents on Noyes Street are expected to get some new neighbors. The city of Utica’s Urban Renewal Agency recently approved selling almost half an acre of vacant land across the street from the former Bossert’s manufacturing site in West Utica to the Rescue Mission of Utica.

The Rescue Mission offered $1,000 for the property, which is made up of four parcels. The deal was approved by the Common Council on Tuesday.

But what is planned for the site? Houses. Well, smaller houses, that is.

“We have a perception based on TV of a tiny house, which is something on a trailer that’s maybe 150 square feet or whatever,” said Jim Haid, the Mission’s executive director. “We’re looking to build a number of homes that are (400) to 600 square feet. So we’ll call it a smaller house.”

The homes are envisioned as having a bedroom on the first floor and one or two lofts on the second floor, along with a kitchen, bathroom and living space, Haid said. Each home could cost approximately $35,000 to build.

The homes will be designed and constructed by participants in a program called Skills for Success — a job-training program and partnership among the Rescue Mission, the city, On Point for College and Mohawk Valley Community College — that gives mission residents and others the chance to learn construction trades.

Participants in the program recently renovated a home at 1331 Sunset Ave. that Haid said sold within three days after it was listed.

While the exact rent hasn’t been determined yet, Haid said it is expected to be fair market rent. The 2016 fair market rent in the Utica-Rome Metropolitan Statistical Area, which includes Oneida and Herkimer counties, was $588 for a one-bedroom apartment and $741 for a two-bedroom unit, according to figures from the U.S. Department of Housing and Urban Development.

Haid said that those living in the homes will rent them and then could have the opportunity to own their homes within five years.

“This is what we want to do, is create permanent housing and attract individuals who might not necessarily qualify for a traditional mortgage based on their income but nonetheless have that dream of owning their own home,” Haid said. “So being able to build these for less than you would a traditional home or even rehabbing of an older home, building more of them, we can go after those individuals and those families whose lower income puts them in a percentage where they cannot get traditional mortgage, but they can afford one of these homes.”

Brian Thomas, the Urban Renewal Agency’s executive director, said the mission’s proposal “represents the creation of affordable housing, which is something that’s definitely necessary in a city that the majority of which the homes have been built 50, 60, 70 years ago, if not more.”

“So, it offers an option for housing that’s not currently available, not only in the city but in the surrounding area,” Thomas said. “I think the project will do well.”

Mayor Robert Palmieri, meanwhile, said that the Mission’s proposal was “thinking outside the box a little bit.” “One of the things that we’re always looking for is bringing community pride back,” he said, “and I think this does it.”

Haid, meanwhile, said they hope to build three homes in a year and then possibly build more in other parts of the city. “Part of the struggle is, with the city, they have many vacant lots … and a single lot you can’t put a traditional home on it anymore because of the codes and regulations,” Haid said. “But with these smaller homes we believe we can help address some of that. So it’s a win for the city.”

The Rescue Mission of Utica recently purchased vacant land on Noyes Street where it hopes to have participants in the mission’s Skills for Success program build several homes. Here are some of the benefits of doing so:

* The cost to build each home would be approximately one fourth that of rehabbing a building.

* More families would be provided with a new home in a shorter amount of time and with one-fourth the financial investment.

* More properties would be put back on the city’s tax rolls.

* The family would have the capability of owning the home in five years.

* Could lead to savings for Oneida County because fewer people would need housing assistance.