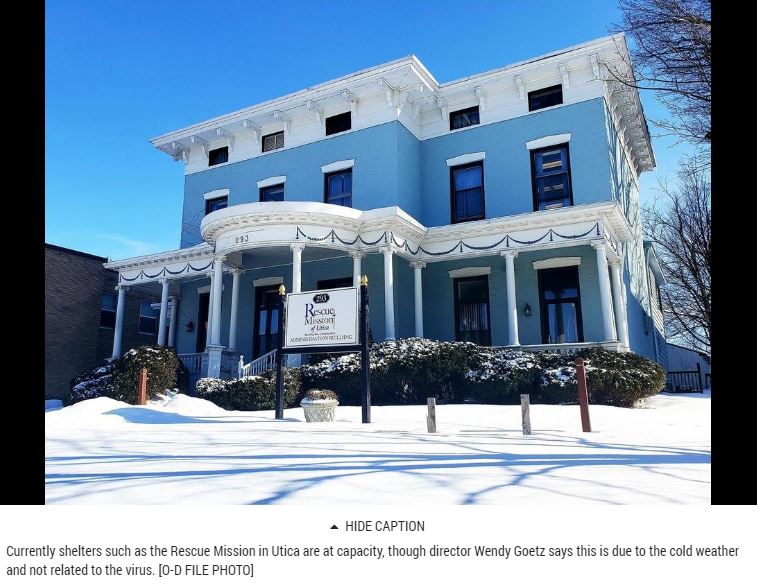 While the majority of the county’s population has a residence in which to isolate themselves while waiting out the coronavirus pandemic, the area’s homeless population face this new risk amid often crowded shelters and concerns that they may disregard social distancing guidelines.

The Oneida County Department of Social Services is searching for answers to these problems — something Commissioner Colleen Fahy-Box described as “an ongoing process.”

The site would be offered to anyone homeless regardless of whether they are in a shelter, Picente said. Because of the quarantine, they would not be able to leave the property.

Utica Common Councilman Joseph Betrus, whose council ward includes North Utica, said in a statement he was assured by Picente’s office that anyone was quarantined at the Red Roof Inn could not leave, while a police presence would secure the premises.

“We’ve talked about having a patrol available at the site,” Picente said.

Other sites and parts of the county are being considered as well, Fahy-Box said.

But while that’s under consideration for the future, she said a current concern is the population density in shelters.

“If a person in shelter becomes symptomatic, it is difficult to provide adequate isolation in congregate settings,” she said. “Often, people presenting as homeless have other health issues or underlying concerns that place them at higher risk for various health concerns including COVID-19.”

Currently, shelters such as the Rescue Mission in Utica are at capacity, though Director Wendy Goetz said this is due to the cold weather, not the virus.

Goetz said that the shelter is practicing social distancing, using personal protective equipment and other recommended guidelines. Regardless, Goetz said many coronavirus-related issues for someone homeless are the same as anyone else’s, such as going out in public.

Catholic Charities of Oneida and Madison Counties Director Denise Cavanaugh said there hasn’t been an increase at Grady’s Way, a shelter for teen boys run by the organization.

“I get the impression people are staying put,” she said. “Even if they are uncomfortable or in an unsafe place.”

But it has been difficult for the teenagers there to shelter in place when they can’t leave to see friends, she said.

Cavanaugh said she does expect an increase over time as people lose jobs and financial situations worsen, especially if social distancing restrictions last longer than expected.

Fahy-Box said there is a concern that someone homeless might not abide by social distancing guidelines.

“If people being sheltered are not under a restriction it can create challenges to manage their activity,” Fahy-Box said.

But, she added, those living in shelters still have to leave to make doctor and other appointments, and are trying to find a place to live.

“Failing to help people move to stable housing from shelters creates a gap in availability for new people needing shelter services and this exacerbates the existing and significant need for shelter beds,” she said. “So, allowances to leave shelter must be managed based on shelter residents health, symptoms, and exposure to the virus and carefully balanced.”