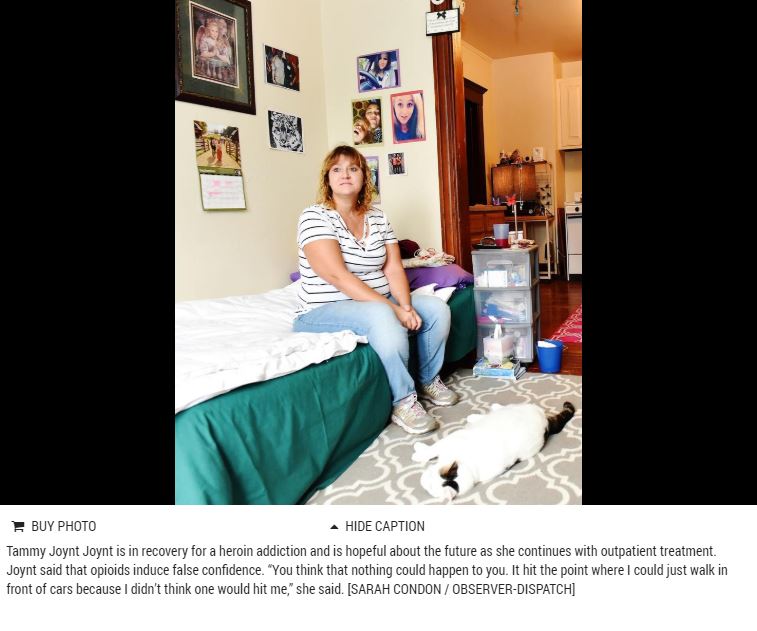 In late January, reporter Amy Neff Roth interviewed Tammy Joynt, who is in treatment for opioid use disorder. This article represents a snapshot in time of her recovery journey. Joynt, a Utica resident, still is in recovery, but has since separated from her husband and moved into an apartment with her cats. This was what her life was like earlier this year.

After years of alcohol and drug abuse, Utica resident Tammy Joynt has discovered hope and faith that life will get better.

And that’s why Joynt, who is in outpatient treatment, thinks she’ll stay clean this time even though life is clearly not yet easy.

“I think it’s better to be clean right now and not have anything than to be under the influence and not realize it,” she said.

In January, her husband of one year – the first nonabusive relationship in her life – was working two jobs to support them, Joynt said. He also was in recovery for alcohol abuse. Making ends meet was a constant struggle and they lived in an apartment where Joynt didn’t feel safe. They had almost no furniture, they slept on the floor because their bed broke, and they didn’t spend time in their living room because it was so cold, she said.

“They want you in treatment and they also want you to work and pay the bills,” Joynt said.

Sometimes when alone in the evenings while her husband worked, the thought of using crossed her mind, Joynt admitted. But she let it pass right on through, playing the tape in her mind of where taking drugs would lead.

“Every time you have a problem come up, you don’t want to use,” she said.

But things were looking up back in late January. They were planning to move to a better apartment with a better landlord in March. And that move, Joynt hoped, would bring her closer to some of her dreams.

“We’re not living so much of a normal life in our house,” she said. “We want to have a normal life where we can come home and sit in our living room and watch TV.”

And then there are her cats, Alex (named after the lion in the movie Madagascar) and Jewel (“because she’s so precious”). Joynt can’t bear to think about what would happen to them if she overdoses or if she ends up in jail, she said. She did spend a year in county jail once and had to give up her cat as a result.

Joynt also has two grown children and a 16-year-old daughter, who does not live with her, and twin 5-year-old grandchildren. She spoke of them with pride and relief that they are “smarter” than her and do not misuse drugs or alcohol.

Joynt grew up with alcoholic parents and was abused by a relative as a child, she said. She has been diagnosed with PTSD, anxiety and depression, but didn’t receive any mental health counseling in her youth. Instead, she started drinking when she was about 25, she said.

Eventually she tried different drugs offered by people she knew.

“That’s why it’s so easy to get hooked on things,” she said. “You don’t really know what you’re taking or what the effects are going to be.”

If that sounds reckless, there was a reason.

“Things had gotten to the point where things were so depressing, I just didn’t care,” she said.

Then around 2014 or 2015, a friend stopped by with her boyfriend to borrow some DVDs. The friend took out some heroin and offered it to Joynt.

“For some stupid reason, I said yeah,” she recalled.

She got hooked and her friend, she pointed out, never did return her movies.

Despite her own use, she expressed surprise that her husband’s 25-year-old nephew overdosed on opioids, saying she’d never expected it to hit so close to home.

“You think that nothing could happen to you. It hit the point where I could just walk in front of cars because I didn’t think one would hit me,” she said.

“I think that’s my biggest fear today – losing my freedom again. … When you overdose, you don’t know it,” she said.

Joynt grew up in Florida and moved to New York, but not Utica, at 16. In this area, she’s been impressed by all the resources to help people in addiction, she said.

At some point, Joynt has been through programs with all the local treatment providers. She spent Christmas 2017 in the Addiction Stabilization Center at the Utica Rescue Mission, even though she already was in treatment, because she thought she needed some extra support.

For a while, she attended a Wednesday evening group – Give It a Whirl – at the Center for Family Life and Recovery that helps people in recovery find new activities to enjoy. She made scented soap and candles, painted a bear mural, made soup and crafted a glitter jar at the program. She’s used to hanging out with people in recovery, she said, pointing out that pretty much all of the contacts on her phone and all her Facebook friends are also in recovery.

If this area does have one resource shortfall, Joynt said it’s places for women to live. None of the women’s shelters accept walk-ins like the Rescue Mission does, she said. And there are many more halfway houses for men getting out of treatment than for women, she said.

Joynt said she’s ready for what she knows will be a lifelong battle to stay in recovery.

“This doesn’t just go away,” she said. “This is a lifelong process. It will be in your life forever. You can’t be cured.”