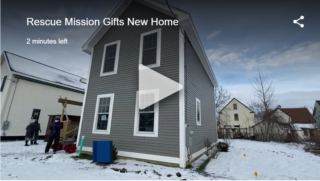 Utica, N.Y.— There’s no better way to ring in the new year than by giving a first-time homeowner a brand new home. The Rescue Mission of Utica, handed over the keys to the newly built small home to John Smythe Wednesday afternoon.

“I always paid rent now I’ve got a home,” John Smythe, first time homeowner said. “I don’t have to pay rent anymore, I never had a home, so yea I’m amazed.”

In collaboration with Mohawk Valley Community College Youth Build and the Mission’s Skills For Success program, students under the guidance of a professional contractor were able to build Mr. Smythe’s home.

“We have an instructor from MV who works with young people to train them in building and trade skills while they also work on completing a GED or they work on other life skills and they are the ones who built this under supervision of a general contractor in the local area,” Wendy Goetz, Executive Director at the Rescue Mission of Utica said.

The home located in Utica, on Noyes street took two years to complete. Mr. Smythe, who works for the Rescue Mission as a janitor, applied for the house a year ago and he’s amazed by everything they’ve done.

“The last time I saw it they were still working on it but now when I walked in I was amazed,” Smythe said. “Then it really hit me like this is mine. When I saw it they had wires and wood all over the place, but this is just the finished project, I saw it when they were just building it ya know fixing it, now like I said I can’t wait to get in here.”