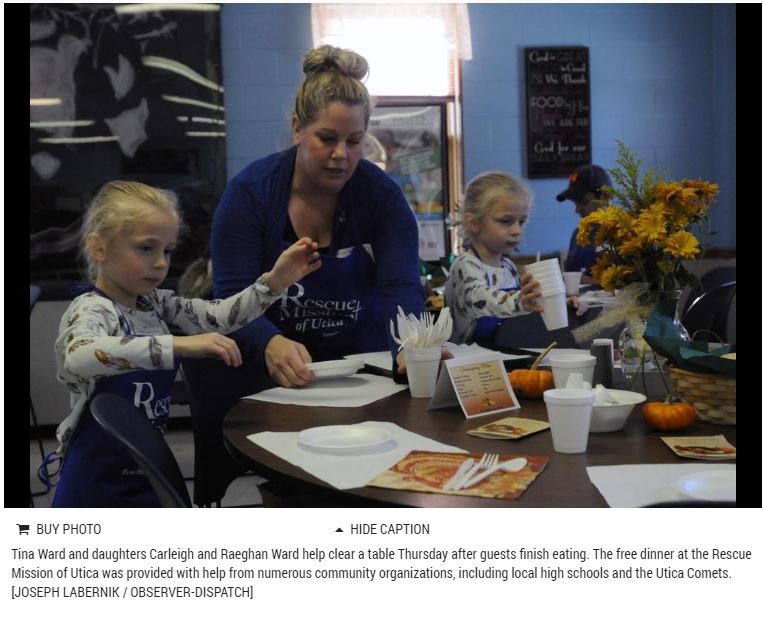 UTICA – No matter the cold or the busy time of year, on Thursday the employees and volunteers for the Rescue Mission of Utica were trying to ensure a nice Thanksgiving for the community.

As is the almost 130-year tradition at the Rescue Mission on Rutger Street, a handful of officers and roughly 130 volunteers helped deliver and serve a Thanksgiving dinner to those in need.

“It’s exciting to be able to serve the community, who blesses us every day,” said Jim Haid, the Rescue Mission’s executive director. “That’s what Thanksgiving’s about: to give thanks for what we do have.”

Following an 11 a.m. service, they began handing out hearty Thanksgiving dinners of turkey, vegetables, rolls, cranberry sauce, mashed potatoes and gravy. Volunteers helped deliver meals earlier that morning, so that by the afternoon the organization had served over 1,000 meals, organizers said.

Volunteers would continue to serve meals until around 5 p.m.

“It really takes the community to crank out over a couple of thousand meals,” he said. “These guests and residents, they really truly are a blessing to us, and we just enjoy being a blessing to them.”

The effort was largely aided by numerous community organizations. Whitesboro High School and Westmoreland High School made roughly 350 pies for the dinner, for example, and the Utica Comets donated 300 turkeys (plus trimmings).

“We live in a hard economic community, there’s no question about it,” Haid said. “It takes a whole community to serve a community, and that’s what we see here.”

It also takes volunteers like Christine Vetere, who has been volunteering with the Rescue Mission for five years.

“I came to volunteer to make a difference in someone’s life,” she said, “and to help make their day a little happier.”

This was her first year serving the food, having worked “behind the scenes” in previous years. It’s a positive and important experience for her and one she hopes is just as strongly impactful for the people she’s helping.

“I think your presence and your help, and to be there for someone, is the best gift you can give during the holiday season,” she added.